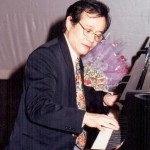 Mr Chong Hung was born in Xiamen, where he started his piano study under his father. In 1957, he entered the Peking Central Conservatory of Music.  There he studied under Professor Lau Pui-yum, Professor Chau Kwong-yan and the famous pianist Yan Sing-chung.

In 1960, he received the Merit Prize in the Competition of Chinese Compositions held by the Peking Central Conservatory of Music.  In 1964, he gave his first piano recital in Beijing.

After coming to Hong Kong in 1982, he became actively involved in piano teaching and performing.  He was invited by the Radio Television Hong Kong for performance recordings.  He currently teaches at Hong Kong Baptist University, the Chinese University of Hong Kong and the Hong Kong Institute of Education.